After yesterday’s exhausting marathon, I realized I needed an attitude adjustment. Haphazardly rushing through the steps and not listening properly to instructions for the sake of Just Getting It Done is tiring, frustrating, and entirely counterproductive. There is no point taking a course on how to make period costumes if I am just going to barrel on through without doing anything properly or paying close enough attention to ever remember how to do it again, whatever “it” may be. So, no more of this maniacal insistence on finishing things within an unreasonable amount of time. It takes as long as it takes.

With that in mind, the morning got off to a cracking start. I had my calico waistcoat made up by mid-morning, and my breeches sewn up by mid-afternoon. Here they are!

breeches – obvs not for me

So once those were squared away (we’ll learn how to put in the split-fall on Friday), I moved on to drafting my jacket pattern. Now this was certainly an experience – flat pattern drafting! Actually, wait, isn’t all the drafting I do flat? Anyway what I mean is, rather than start with a mini-pattern on a grid and scaling up (which is what I’m used to), today’s pattern came in the form of several diagrams and a list of instructions, like so: 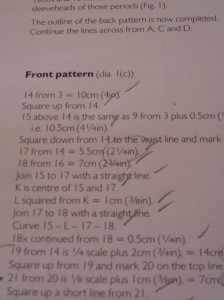 knowing what this means makes me feel clever

See the part at the top where it says “Continue the lines across from A, C and D”? No, neither did I. Which is why I ended up having to sellotape the piece of paper with my completed center back panel back onto the larger sheet from whence it came, having sliced it off content that part one was complete. I didn’t realize that the instructions for the rest of the jacket pieces carried on based on the first few points on my newly severed pattern piece. 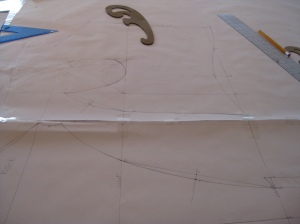 The other minor setback was when I realized that I had, about a dozen steps back, accidentally drawn a dot somewhere up 4 1/2 inches instead of 5 1/2. I only noticed after I drew the curves for the armhole and thought gee, that looks awfully small. Fortunately going back to fix it only took up about an extra 10 minutes.

Despite a bit of faff, I quite enjoyed this new exercise. It felt a bit like math class, or building lego. I think so far pattern-drafting has been my favorite part of the course, if only because progress feels so quick. 10 minutes of drafting and you have something that looks like something. 10 minutes of cutting and you’re still messing about with swathes of polycotton trying to get selvage edges to match.

And what of the shirt, you wonder?! WELL, as it turns out, only one cuff needs to be on for the fitting – just to check that the sleeve length is right. So, just as well I only got one on, because it just might so happen that Ben’s arms miraculously change length in the next two days! Which means that all I need to do for the fitting on Friday afternoon is put the collar on! I say “all” as if it’s not a fiddly tw0-hour job. Here’s hoping.

Tomorrow is finishing the jacket pattern, cutting it out in calico, and if there’s time left, sewing it up. No hurry though – Ben’s fitting isn’t until Friday at 5.30, which leaves two days to do, at an optimistic estimation, a day-and-a-half’s work. We shall see how it goes!