Right, so now we’re going back a bit to the beginning of our 1940s project. I had already found a brilliant Liberty silk that I knew I wanted to use for this project, so I chose my design with the fabric in mind. Not to mention the fact that by this point I was exhausted and wanted something I knew I could achieve in a week, e.g. no sleeves, no collar, no darts, no boning. I’d also never made anything really drape-y and flow-y before, so I wanted to try something new while I had the luxury of Pauline’s expert guidance.

This is what I arrived at:

The first step was to draft a pattern for the skirt, and then make that up into a toile to drape on the stand. I adapted the pattern from a similar skirt that I got out of an original 1940s pattern drafting book:

Instead of putting the funny bulge at the side front seams, we moved them to the side seams to create a drape over the hip. There wasn’t loads of fabric going spare, so I made a mini-skirt version to start with:

It took some trial and error, but eventually we arrived at a pattern that would do the job: 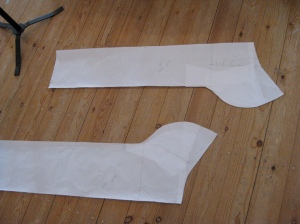 After the skirt pattern was sorted I moved onto the bodice. I decided I want a cowl back and again adapted a pattern from the magic 1940s book: 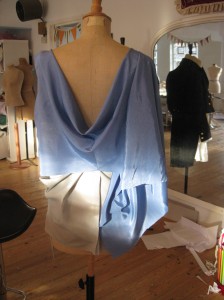 Again it took some trial and error, but we cracked it in the end. The front was essentially a basic bodice block that we allowed to hang loosely rather than put any darts in, and with most of the neckline cut down to create a sweetheart shape.

Once the patterns were finished, it was time to make a proper toile in a fabric similar to the silk. I had to make two toiles of the skirt: one cut on the bias and one cut on the straight, to see which would drape better. Initially we thought on the bias would be best, but then the drapes turned out a bit too floppy and saggy, so we decided to cut it on the straight. 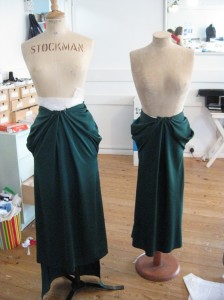 To be fair, the fact that I put the bias-cut toile on the form without a bum probably didn’t do it any favors (right). Even so, cutting it on the straight was best because the real silk was a lot drapier than the toile fabric.

Here’s me in the toile for the fitting:

You’ll have to forgive the Christmas colors; there wasn’t enough of any one fabric to make it all one color. That also explains why the back of the skirt is longer than the front.

There was still a bit of tweaking to do on the front neckline, but eventually I arrived at this: 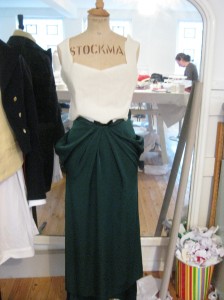 Next post, I’ll have pictures up of the dress in the proper fabric. Stay tuned!