If I may quote myself, this was the state of my bodice to-do list by the time it was meant to be finished (i.e., the Friday before 1940s toile week):

As I didn’t have any more time to do the work at home, my plan of action was to work on the bodice until about 10.30 every morning before cracking on with the 1940s dress, and then going back to the bodice in the evenings. Sewing the last of the bars on wasn’t so bad, but then came the time to, *gulp*, cover buttons.

That first evening, I spent about two-and-a-half hours messing around with cover buttons. Guess how many buttons I covered, and rather sloppily at that? Three. Yes, three buttons in nearly as many hours. With 39 more to go. I was not a happy bunny. 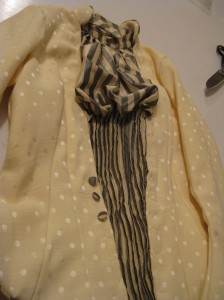 But, as ever, I was determined. I accepted defeat that first night, and resolved to come back the next day and tackle those buttons with fresh eyes and a good night’s sleep behind me.

And lo, by about button #5 the next day, I had cracked it! Once I got the hang of button-covering it became more of a stop-and-go project, a few here and a few there in between making the 40s dress. Eventually I had 42 covered buttons.

At that point I left the bodice and focused on finishing the dress, which I did by the end of the day on Friday before the photo shoot (I think). Actually, those last two days have gone kind of blurry in my mind, but I seem to recall getting 18 buttons sewn on by the end of the night on Friday and going in on Saturday afternoon to sew on the other 24. In the end, I had my last button sewn on by 8.30 Saturday evening, an entire 36 hours before the photo shoot! Et voila: 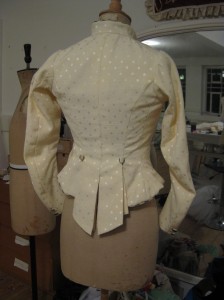 And that was that. Coming up: the photo shoot!