So when I saw square cutting on the timetable for week 2, I assumed it was something I’d never done before. Turns out I have done it and just never knew that’s what it was called – which is silly in retrospect, as it literally is cutting squares:

This pattern is for the period men’s shirt we’re making this week, from The Cut of Men’s Clothes by Norah Waugh. This is my second foray into men’s shirting, the first time being at Northern College of Costume for Regency menswear – the pattern we used then is actually out of the same book. I really didn’t enjoy it much the first time round, as chronicled in my previous entries Getting Shirty and My Kind-of Shirt. Here’s the result of my previous efforts, from Ben’s toile fitting: 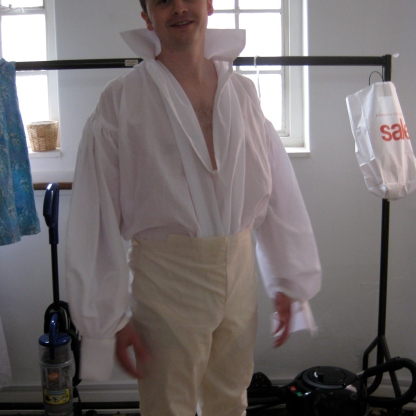 But I digress. I’m happy to have another go at a square cut shirt, but I also know the world of faff I am in for with these gussets. Also, this time there are industrial sewing machines to contend with, which I haven’t used since my two-week placement at the Manchester Library Theatre in 2011. What would be a 2-minute sewing job on a domestic machine becomes a 20-minute song and dance, re-learning to thread and wind a bobbin on an industrial machine, plus a few practice runs to get a feel for the pedal and speed.

It’s not the fiddly sewing I find especially difficult, or even getting to grips with the industrial machine. Instead, it’s the pressure I feel as an MA student – not to mention an MA who’s completed a costume construction course before – to work quickly and to work well. I’m confident my shirt will look fine once it’s finished, but my progress has been slower than I’d have liked (and I feel the stuffy head cold/chesty cough I came down with on Saturday and have yet to shake is only partly to do with it).

On the flipside, working alongside the second-year BA students is a good reminder of how far I’ve actually come. Sure, some of them can still pin and sew faster than me, and are naturals at crochet, but I get a little glow inside when they come to me with questions. Not many, mind, but just enough to make me feel like I know what I’m doing.

…Speaking of the second years, here’s Ellie modelling the (sleeveless) polonaise toile from last week! Jill says I must take her measurements, as she’s the first person she’s come across who fit the pattern so well: 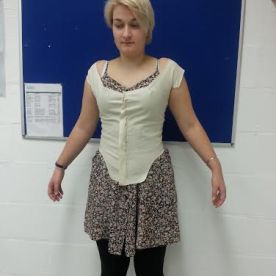 Here’s hoping that by tomorrow I’ll have something resembling shirt to show you all. Until then, goodnight!

2 thoughts on “Getting Shirty: The Sequel”