I am not a 3D-thinker. I can not look at somebody else’s perfectly faced breeches and translate them into the steps I need to take to face my own. Before this sounds any weirder, I’ll say that the facing is a bit of fabric that goes around the inside hem of each trouser leg – the same idea as a waistband. It sounded easy enough when Pauline explained it to me last Friday, but when it got down to it the whole button-stand/button flap thing was completely baffling and as a result I’ve done it Slightly Wrong. Turns out the flap that I so carefully and neatly slip-stitched into place is supposed to flap open so that you can actually button them up. 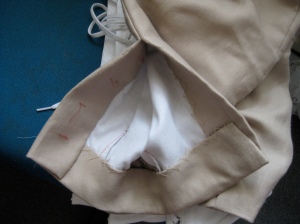 how not to attach facing

It’s not a problem really; it just means that my flap doesn’t have facing on it because I didn’t think it needed it (since it was going to be sewn down flat anyway, right? wrong) and had to budge it around so the damn facing would actually fit around the hem. 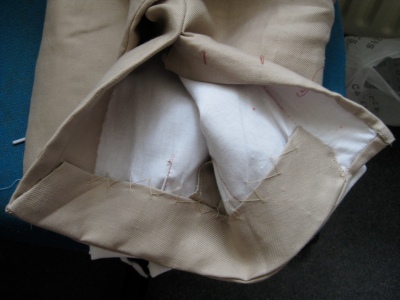 That’s the one I’ve adjusted; I still need to unpick and neaten up the other side. It seems so obvious now, the way the flap works, but yesterday morning I Did Not Get It. Le sigh. At least I know now, right? Trial and error, problem-solving, all that nonsense. Facing a pair of breeches will never baffle me again!

Now all I’ve got to worry about is that flap being strong enough to hold the buttons. I’m sure I interfaced it, but it it feels a bit floppy so maybe I didn’t (again, I’ll put that down to not having a clue how that bit was going to work). I brought the breeches home to fix that other bit of facing, which of course led to an impromptu fitting: 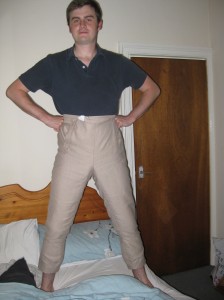 they fit! just about.

The first thing he said was, they’re too small. And I said what?! No, no they are not, they can’t be. What you think is “too small” is actually a perfect fit; you’re just not used to the way trousers fit in the 19th century. I was saying all this to convince myself as well as him, but once we got him pinned into everything (no buttons yet, as ever – sigh) he agreed that yes, ok, the fit is fine, just a bit tighter than he’s used to. What I need to do now is make damn sure those buttons at the hem go on nice and tight, because there’ll be a lot of strain on those when he sits down.

In other news, the sleeves of the jacket are well and truly finished! Properly on, lined and everything! I left myself notes for Monday when Pauline wouldn’t be here so I’d remember what to do: 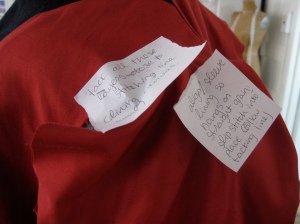 Here it is, the nearly-finished product: 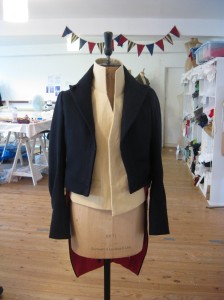 A close-up of the collar: 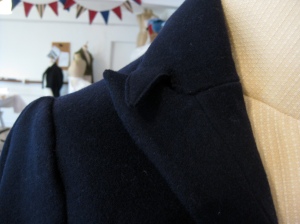 could use another press, I think

I still need to stabstitch the lapel so it matches the topstitching on the collar, so I might go back in on Friday to work on that. Or I might leave it until the buttons and buttonholes bonanza.

Lastly yesterday I got all the bones into my corset! There was only one channel that I really struggled with; the rest were roomy enough for the bones to slide in fairly easily. AND the bias binding is on!! My finish isn’t brilliant but, for all intents and purposes, the corset is done. I brought it home with some lace hand-sew onto the top, more to hide some wayward stitch-in-the-ditch-ing than anything else.

There are still loads of things to do, mostly (bet you can guess) buttons and button-holes and some hand-finishing here and there. But the point is, everyone still has loads of little things to do! I’M ALL CAUGHT UP!!!

I’m going to relish this feeling, because no doubt it won’t last long.

Here’s a look at what my schedule has been like for the last few days:

Basically, I’ve been putting in an extra two hours every day – and I’m still behind. This is not entirely my fault. On Monday we were all meant to come in in pairs for two-and-a-half hour blocks, during which time we could spread out on the tables and cut out the fabric for our jackets. My slot was 4-6.30. When I got there at 3.30, everyone who had been on the morning and midday blocks were still there, because that’s just how long everything took. Unfortunately our tailoring tutor had to leave at bang on 6.30, which meant that unlike everyone else that day, I didn’t get an extra five hours to work. In the end I spent the entire two hours readjusting my paper pattern, and which I didn’t finalize til Tuesday. I got there eventually: 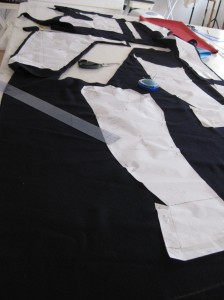 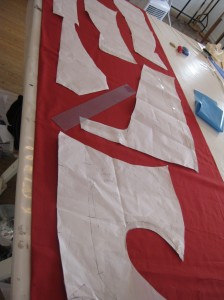 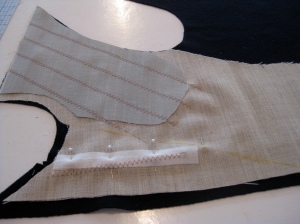 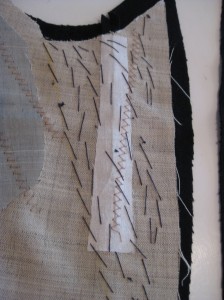 A bit clumsy, but effective all the same. Padstitching is to ensure that the lapel rolls back nicely. It’s all hand sewn. This is how you know you’re doing it right: 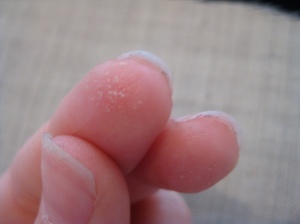 Yeah, those are my flaky fingertips, thanks to dozens of teensy pricks with the needle.

That’s as far as I got on Tuesday, and started with pockets this morning:

And on it went. 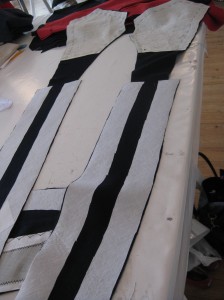 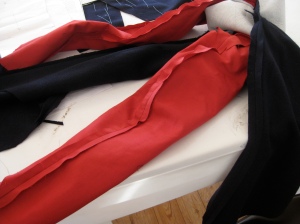 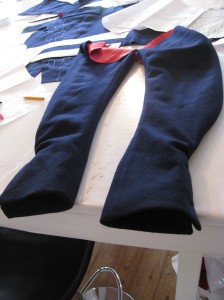 And there’s STILL loads to do.

In other news, I finally finished the damn fall front on my breeches!! 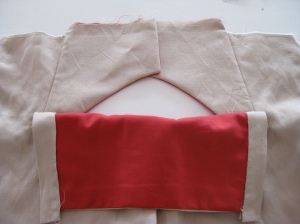 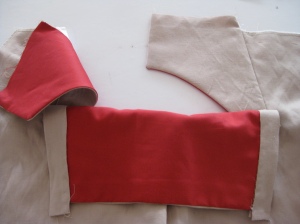 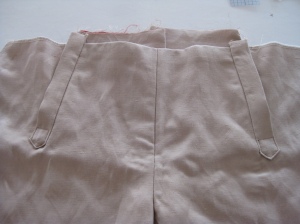 Needs a press. This fabric is a nightmare. 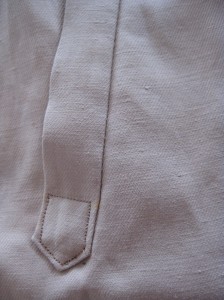 And oh yeah, I’m taking tomorrow off because Ben and I are leaving to visit my parents in Broadstairs for the weekend! Eeee! Which means I have one less day to work on my jacket… but it also means a weekend at the seaside!!

Meh. I’ll make it up next week.