So this post is all about not what I was working on last week, but the week before: the bodice!

The next step after zig-zagging all the seam allowances was piping and facing the bottom edge, like so:

Kind of a fiddly job because you have to pin the piping and the facing all at once, and then make sure it doesn’t shift about when you sew it without actually being able to see the piping (as it’s sandwiched between the layers), but the end result is pretty neat:

And then it came time to face the pleats at the back, and what a headache that was. I spent half a day on those damn pleats, and that was with Pauline’s help. If I never pleat anything again it’ll be too soon.

Although to be fair, working out the pleats probably wasn’t as bad as the four hours I spent pin-tucking the center front panel, which I wasn’t even sure I liked the look of after I’d finished. But that was a moment of madness, I think, because now that it’s all coming together I quite like it:

This was the stage I’d got to by the end of the day on Friday September 2nd, when it was all meant to be finished. To be fair I did get all the major construction elements finished (sleeves set, collar on, center front panel more or less finished off thanks to Pauline), but there was still a lot left to do.

I say “was” because, a week later, after two straight days of hand-sewing and very little else, I have finally made a dent in the finishing. I’ll write it out in list form so I feel more accomplished:

Ok, just as I was starting to feel like I’d gotten somewhere, this list exercise has brought me back to reality. The buttons are scaring me a little. This is the first project I’ve decided to cover my own buttons, and the ones I’m using are small and fiddly. The few half-hearted attempts I’ve made to cover them so far have ended in failure.

And surely you’re wondering, why 42 buttons!? Well, there are 18 down either side of the front panel (originally just for decoration, but conveniently also to hide the stitching from the hooks) which makes 36, two on each cuff, and two on the back (the last four will be the slightly larger buttons). I may be crazy, but the thought of sewing them all on doesn’t actually bother me – they’re not functional so only have to be secure enough to not fall off, and the stitching from the hooks marks exactly where they need to go so there won’t be any double- and triple-checking that they’re all in the right place.

Let’s see if that’s still how I feel after I’ve made a start sewing them all on.

And now for the fun stuff: more fitting photos! 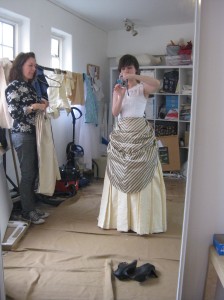 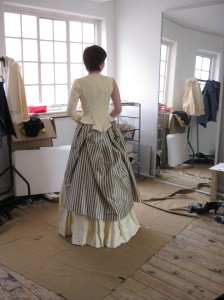 I reckon I’ll need some slightly higher heels – those pleats just aren’t falling right. Although Pauline did say that was probably because the skirt closures aren’t finished and once the proper closures are on, the cage, petticoat, and skirt will stay hitched up and won’t sag so much. Yes, skirt closures, that’s another one for the to-d0 list…

We’ll end with one more photo, because I think this one best shows off the back pleats (note the piped edges!):

Phew! That was only a week overdue.